Grounding. This is something that is both very basic and very imperative. I was pretty young when I first learned about grounding, though it wasn’t called that when I was told about it. I was basically being told to calm the hell down and that I’ll feel better once I do. And you know what? She was right. I feel very deeply, and always have. I have this uncanny ability to be calm on my exterior though. Internally, I hate it when people cry and still cringe when strangers open up to me. I become very nervous easily and can feel painful scenarios–especially emotional ones–up and down my spine like nails on a chalkboard.

Hand me a chicken whose eye is infected with pus needing to be drained and I jump into action, focused on the task at hand. Lead me to the goat who needs help giving birth and I’m ready. Find me a goat who is depressed because her best friend just passed away and I’m internally falling apart.

We all gather up many different types of energy throughout the day. Sometimes we don’t even notice it. Even if you’re not doing any rituals, spells, or anything magical at all, you still gather energy, and some of it can be negative and draining.

Grounding is when you balance yourself out. It sounds simple, but it can be difficult in today’s society where we’re expected to always be on the go. It’s very difficult for many to shut out the outside world and focus on ourselves. That’s difficult even for people who don’t practice witchcraft.

I recommend learning to ground yourself before practicing any magic. You can still pick up energy from practicing the craft and not being able to ground can lead to feeling drained and unbalanced.

Some signs that your energy may be unbalanced include:

There are so many ways to practice grounding. I’ll tell you my favorite form last. 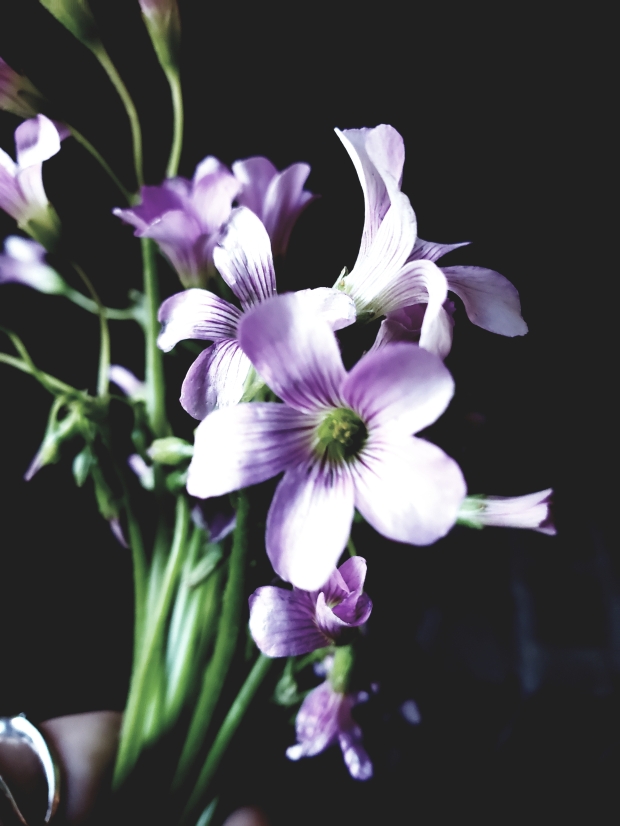 I also find running to help, too. Not everyone is a runner. I do sometimes have an excess of energy I need to expel. My homelife and worklife can both require quite a bit of physical energy from me. I also practice yoga. Even then, sometimes I want to go for a run rather than walk. Walking or running, being in nature while you do this is key. Even if being outside is not your favorite thing, I still recommend it. Especially during your favorite season. I love going outside all year long, with my favorite time being autumn. However, the need to hibernate hits m hard in the winter time and I avoid the cold at almost all costs. I am lucky in that I can go outside and hang out with my dogs, donkeys, or goats. This is very grounding for me as I have a strong connection to my animals. We have a very small wooded area in the back of our house that pulls me sometimes. Sometimes I let it pull me. I’ve encountered snakes, crows, lizards, frogs, and all sorts of birds. I even have a tiny stump for an altar where I leave offerings. I also wildcraft blackberries, pepperweed, and goldenrod in my tiny wooded area, depending on the season.

Find a place outside you enjoy. It could be a patio or porch. It could be a garden. If you don’t have a lot of outside personal space, set up bird feeders and bird baths with a sitting area (if your yard doesn’t have enough room for walking). If you’re out there enough, a little bit of nature will get used to your presence.

Still want to go for a walk? Find a local nature trail or park you can visit.

Not my favorite way to ground, but this is important as a lot of rituals and spells call for you to do this anyways. One form of visualizing I like to do is when I take a shower or bath. I visualize the water washing any bad energy or blockages off me.

You may find you like crystals, you might not. I greatly enjoy crystals, but I have a nasty habit of surrounding myself with crystals that heighten awareness. There are crystals out there for grounding, I just don’t have any. I really should though. Some great, common crystals for grounding are: hematite, smoky quartz, and black tourmaline.

Playing in the Dirt

I did this all the time when I was a child. This was my ultimate form of grounding as a young child who spent many moments outside observing nature in the backyard. The title says it all. Do something in the dirt. I used to love to dig my hands in the soil and feel it fall through the cracks of my fingers. I loved the smell and texture. The worms and creatures residing underground did not bother me, though I’m sure I bothered them. Now, as an adult, my form of play  is in planting and working in the garden or with our homestead crops. I won’t lie though. I still smell the dirt and let it fall through my fingers.

This is my favorite form of grounding now and sort of stemmed off–for me at least–from playing in the dirt. I love going outside barefoot. Not around the donkeys. Their hooves hurt if they accidentally get you. Not around the chickens either. They try to peck the nail polish off toes. It’s both annoying and surprisingly excruciating. When you root yourself outside you start with all the energy built up internally, near the top of your head. You imagine all that energy moving downwards, collecting more energy in your body as it moves down. Ball all that energy up. Move that ball of energy down through your feet, into the earth. Find the earth’s energy. Gather that energy into a ball and evenly distribute it back into your body. This technique relies pretty heavily on visualization.

I have a confession to make. I don’t ground often. It was one of the first things I learned about witchcraft and I don’t do it often. I should do it more often. Below I am going to offer scenarios when grounding can be hindering and when grounding is necessary.

I don’t find that grounding hinders day-to-day things like using your intuition. I find that grounding can help let go of some energy that is hindering me, but it doesn’t shield me from acquiring new energy, both good and harmful, even later that day. So, if you’re extremely emphatic, you may find yourself still attracting other people’s energy. You need some blocking and shielding techniques to reflect some of that negativity off during the day, which isn’t exactly the same as grounding.

So grounding is important, but when you do it is just as important.  If you’re working with any magic, you may find it to be hindering, but it is a great tool to use after you work with magic or if you’re feeling a little off balance. Thank you very much for reading. Leave comments if you’d like to share anything or ask questions.

Some books to look into:

We live on a small homestead. We work with animals, plants, and the moon.